Press Pass LA caught up with creators of  “Better Call Saul” Vince Gilligan and Peter Gould at Paley Fest in Los Angeles at The Dolby Theatre to discuss their show and of course Walter White!

The success of spinoff Better Call Saul may be a phenomenon to some, as spinoffs are rarely as beloved as their origin, b 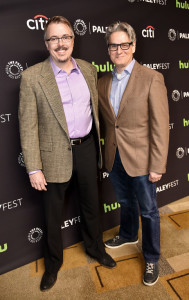 ut to others a testament to the genius of the world that Vince Gilligan and Peter Gould created.

We talked to them about their decision to create Better Call Saul and why they feel audiences weren’t ready for the end of Breaking Bad and the characters of that series. WATCH above!