THE VOICE CELEBRATES ITS 7TH SEASON AT SAYERS CLUB IN HOLLYWOOD

The voice celebrated its 7th season at the Sayers Club in Hollywood last night as Judges Usher, Blake Shelton, Shakira and Adam Levine shared their thoughts on the present season. News broke earlier this week about Pharrell coming to the show as a new judge.

Judges are excited about the new addition but there was more talk about that hat rather than the talents that he is going to bring to the show! Carson Daly was asked who’s hat is better Usher’s or Pharrell’s? He answered with ease, “Pharrell’s hat, Usher’s hat looks like it’s going to eat you.”

Shakira looked gorgeous as she step out to do interviews with her pal and fellow judge Usher. Her goal this season is to share her experiences with the contestants so they can learn from her so they can continue and pursue their dreams regardless of the judges decision. “I learn so much. Working with country artist, for example Miranda Lambert, that was an extraordinary process of beginning to observe her and to kind of learn from her. She’s an amazing artist.”

“We are kind of reliving all of what the passion of being an artist is about,” Usher said, explaining his thoughts on how important it is to work with young talent and what he learns from the contestants.

Would you go on The Voice if you already didn’t have the success that you had? Well Shakira’s answer may surprise you. ” I probably would but I would probably get kicked out the first week.” Shakira said she needed time to finesse her craft and perfect it without the cameras rolling. She gives the contestant a lot of credit for what they have to go through.

Usher explains how The Voice is different from the other reality competition shows on air now. “The unspoken process of being an artist is all in artist development. There aren’t any other shows that go through the process quite like The Voice does.”

Its not easy being Blake Sheltion, it breaks his heart every time he has to send someone home. “The worst part of the job is anything between the blinds and the live shows. It sucks for coaches the first thing we do is beg these singers to be on our teams and then we kick half of them off.” Now Miranda was back this season to be a coach to the contestants. When asked what was it like having her with Shakira, Mr. Shelton replied, “I took a lot of screenshots with those two together, know what i’m saying?” Oh Blake! 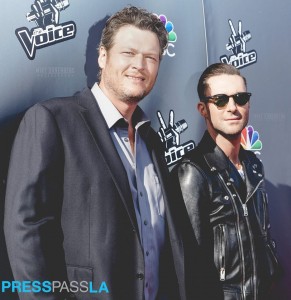 The bromance between Blake and Adam continues as they still joke around with each other constantly. “I just look at everything he’s doing and don’t do it,” says Adam Levine. ” I only won one less time than you have.”

“There will definitely be a season 7, I heard Pharrell is going to be on it,” confirmed Blake Shelton, wrapping out a fantastic evening.

Check out our Photo Gallery from the red carpet!