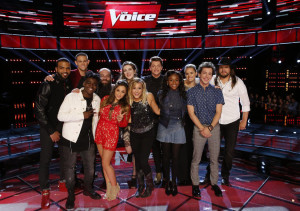 We spoke to each team about what it was like to hear their names revealed on stage and the challenges they face on the rest of their journey to become this season’s The Voice.

Returning winners, Season 9’s Jordan Smith and Season 1’s Javier Colon, were on hand to given contestants advice about embracing their time on the show and fill us in on what they are up to now. Hint: A new album and a wedding are in the works for these two!