If you missed last weeks two-night live show extravaganza of The Voice, here’s everything you need to know before tuning in on Monday, April 28th.

Resident rocker Kat Perkins was compared to some of rock’s greatest icons after delivering her rendition of “Magic Man.” Usher gushed that Perkins proved she “has what it takes to be on radio right now.” Christina Grimmie, and youtube’s most popular Team Adam member with over 2million followers, sang Katy Perry’s “Dark Horse,” earning her rave reviews from each coach. Team Adams third member, Delvin Choice, had a stand out performance of “Unchained Melody” that really showcased his “silky voice” as described by Shakira. Coach Adam looked on with a smile throughout, and rightfully so; his was the first team to have all acts put through to week two of the live shows. 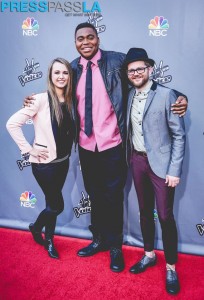 The second team to have all acts put through are a little bit country, a little bit soul, and all Team Blake Shelton. Audra McLaughlin left it all on stage during her performance of “Angel In The Morning” that impressed her coach so much Shelton complimented “I swear, you are one of my favorite country singers.” McLaughlin was completely thrilled when asked about that moment, “when Blake Shelton says anything to you…you’re just in awe…but the fact that he said that is irreplaceable and truly amazing.” Country singer Jake Worthington melted hearts with an emotional rendition of “Anymore” and was even a bit choked up when he spotted his family in the audience; as if we didn’t already want to give him a big ol’ hug. Sisaundra Lewis exuded soul, showed off her skills and proved just how seasoned she is with “Don’t Let the Sun Go Down on Me.” Lewis also dropped a few hints towards performing a country song on the show and says she’s got her boots ready.

Kristen Merlin had the most memorable moment for Team Shakira, and possibly of the night. Her mic went out for a solid 22 seconds at the end of her take of “Sugarland’s Stay” leaving audiences shocked as she continued singing along until a replacement mic appeared picking up the last word of the song, “stay,” and that’s just what she did. The other two artists on Shakira’s team, Dani Moz and Tess Boyer, were not as lucky. Despite the praise they earned from their performances, they each landed in the bottom three. Boyer went with Kelly Clarkson’s “Dark Side” while Moz chose “Turning Tables” by Adele for their last chance songs. The instant save, back from last season, sent twitter a buzz as fans began tweeting and retweeting #VOICESAVE in support. Boyer was saved and will continue on in the competition, while Dani Moz has reached the end. Describing her time on The Voice as a “wild ride,” Moz is most thankful for the courage and confidence she’s gained from her coach, Shakira. “If anyone could do it, it was you,” offered Shakira about Bria Kelly’s explosive performance of Adele’s mega hit “Rolling In The Deep” at the top of Monday nights show. 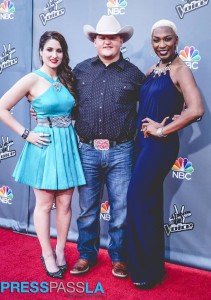 TJ Wilkins and Josh Kaufman, also Usher teamsters, delivered high rated performances. Kaufman closed the show with “Stay With Me” blowing away all of the coaches. Former coach Adam Levine was so impressed that his first comment was, “I’m so stupid,” referring to his choice to keep Delvin Choice during the knockout round instead of Kaufman. Usher was especially happy at the end thanking Kaufman and stating simply, “you made this my night.” And it was, ‘til it wasn’t. Team Usher lost Wilkins Tuesday night after landing in the bottom three and belting out his last chance song “I’ll Be.” “I look forward to building from this moment as a great recording artist and performer and continuing on in the acting field…you’ll definitely be seeing me again,” Wilkins said before sharing his last exchange with Adam Levine before exiting the show, “two words: Jennifer Hudson.” After all, she did win a Grammy!

Now that you’re caught up, tune in Monday night for the Top 10 performances and don’t forget to let us at PPLA know who you’re rooting for!

Check out out Top 12 Photo Gallery.