A Walk through Jonathan Davis’ Black Labyrinth at The Rave

Many people know Jonathan Davis, also known as JD, as the soft-spoken yet powerful frontman of the band Korn, but he has recently embarked on his first official solo gig, filling fans with anticipation and curiosity. While he has done other solo work with SFA (Simply F*cking Amazing) and released two live albums, Black Labyrinth is his official highly anticipated studio solo release.

Earlier in March the album’s first single “What it is” leaked along with a music video which received mixed reviews. What I’ve learned after spending time talking to some of the country’s biggest Korn fans is that there are different kinds of mentalities when it comes to frontmen breaking away from their original bands to do solo work. Some fans, which could best be described as total band zealots, usually don’t want to hear any material other than what the band has collaborated on and put out together. They fear a one-man-show couldn’t be as heavy or hit as hard as the group together. 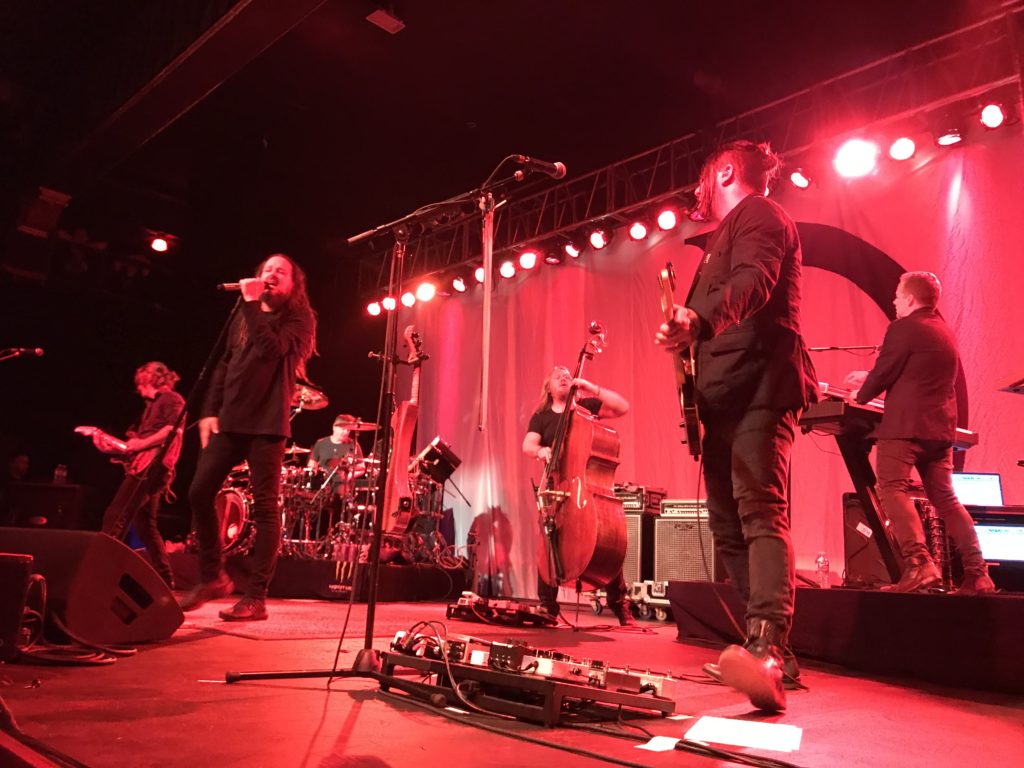 Other fans are more vested in Jonathan’s life as a front man, wanting to see where his solo ambitions will lead. Most Korn fans are approaching this new album as they did JD’s previous solo work, with slight apprehension, hoping they’ll hear more of Korn’s sound in his work, but I personally and looking to see what he can do without Korn’s influence. Being a big fan of his work from 2007 like “Alone I Play,” I was really amped to see what he had been up in the past ten years outside of the band. Luckily, the night I saw JD and his group in Milwaukee I was surrounded by some really dedicated fans of all his work, and it seemed they were more than delighted to have the chance to see him perform some new songs off Black Labyrinth for the first time.

I made my way up to Milwaukee from Chicago for this gig, dodging a literal black labyrinth of street cones and road construction to make my way to The Rave, the city’s most revered venue for rock. The place was already packed with people in Korn shirts and Adidas tracksuits, so I knew I was definitely among peers. One of the best things about small venues like the Rave is that it’s a pretty intimate setting, especially for a musician who is used to selling out massive festivals and amphitheaters. In fact, the setting was so intimate that the photo pit was actually tiny and filled with some VIP fans who were giddily waiting for the band to hit the stages while the crew helped set up.

The band took the stage and immediately went into Underneath my Skin, a song of Black Labyrinth. The crowd was definitely into it, and there was no an empty spot on the floor. They proceeded to seamlessly go through their set, with 11 songs off of the new album, three from his previous solo work, and one fantastic Neil Diamond cover called Love on the Rocks. The venue’s balcony was overflowing with people as they watched some fans crowd surf in the small pit below. That’s right people, there was crowd surfing at a solo JD gig, so if you’re worried that his new album isn’t heavy enough, well, you’ll just have to think twice.

What struck me most about JD’s band was how well synched they were, so I went and did some research. Ray Luzier, also the drummer of Korn, was giving a fantastic percussion performance, which was expected, but the rest of the band received an overwhelming ovation by the end of the night. They did an outstanding job and deserve personal recognition by name:

I’m looking forward to the studio release of this album which is soon to drop. For any reluctant Korn fans out there that haven’t given any of his previous solo work a shot, I recommend warming up before seeing him this summer by listening to “Alone I Play” to get you in the right mindset. The Black Labyrinth tour will certainly not disappoint anyone who has been a fan of Korn and Jonathan Davis. To people who have never listened to either, the experience will undoubtedly live up to its name as there are a lot of mystical and bass-heavy sounds to explore.