Over the weekend thousands of fans gathered together in Nashville at the Music City Center to celebrate all things dead, demonic, and downright creepy. Actors from AMC’s critically acclaimed shows The Walking Dead and Fear the Walking Dead as well as Syfy’s Z Nation were in attendance with numerous others to discuss their shows via panel.

A Walking Dead Experience was set up along with many artisan craft booths depicting scenes and characters from many of the shows being represented at Walker Stalker. Fans even had the opportunity for professionally photographed meet and greets with certain actors, and all stars in attendance had booths set up where fans could come up, shake hands and even get autographs and selfies. Any one of these activities will set you back a pretty penny though ($50 was the common asking price for an autograph/selfie combo), but don’t worry there’s plenty of ATM’s set up for your convenience! 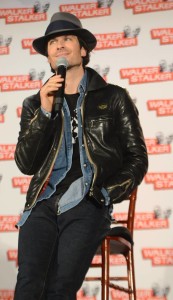 Ian Somerholder talks about The Vampire Diaries during a panel.

The panels were the real meat of the experience for me personally as fans could, free of charge, ask their favorite actor’s questions that would range from theories for future episodes to fan fiction pondering what their characters might do in another setting. Tom Payne, who plays a character named Jesus on The Walking Dead, was asked how he felt about the name and chuckled as he responded, “People, especially here in the South, tell me they’ll be driving and see signs saying ‘What Would Jesus Do’ and they think of my face first. I can do no wrong now.”

Easily the biggest fan favorite, well, female fan favorite for sure was the dreamy Ian Somerhalder from CW’s The Vampire Diaries who answered many questions about his character and his foundations. When asked what version of his character Damon he liked the best, immediately he said, “Badass Damon. He’s a character that’s on a hundred-episode arc, so he has moments of vulnerability and weakness, but being a badass early on was my favorite part of the character.” Ian also had a statement about his company, The Ian Somerhalder Foundation, “I’m confidant that we can raise our children to live in a world where we respect ourselves, the environment, and the animals on it.”

All in all Walker Stalker is a decent convention where fans can pay through the nose for a brief moment to meet characters they spend hours upon hours obsessing over. If you can afford it and are a super fan of Walking Dead or Z Nation you’ll have a good time, casual fans should steer clear of this cash grab.