Universal Studios Hollywood opened up its permanent “The Walking Dead” attraction yesterday! Check out a first hand look at what happens when the undead take over a Los Angeles theme park.

Today, Universal Studios Hollywood unlocked the iconic “Don’t’ Open, Dead Inside” doors to usher in its all-new “The Walking Dead” permanent daytime attraction, based on AMC’s top-rated television series, which officially opens to the public on Monday, July 4. 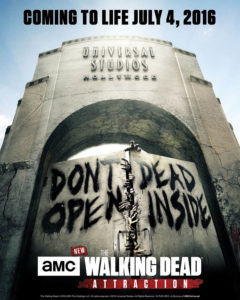 A horde of 100 ravenous walkers were also on hand to help bring the event to life. Watch our video for a behind the scenes look!