WANT TO UNLEASH YOUR INNER CHILD? TRAVEL TO DISNEY’S TOMORROWLAND

When one goes into a Disney movie named after a section of a theme park, one might assume it’s a family movie geared towards children. That one would be correct. Through the eyes of a child, Tomorrowland is an amazing movie!

Produced, co-written and directed by Brad Bird (The Incredibles, Ratatouille, Mission: Impossible-Ghost Protocol) it’s got a sense of wonder and lots of action. It begins much like the videos do at the beginning of a theme park ride, a narrative speaking directly to the audience preparing the eager attendants of the upcoming excitement. After multiple introductions to characters, the movie begins where else but at Disneyland.

We follow Frank Walker (Thomas Robinson), a boy genius with a bright outlook on life determined to inspire people with his inventions. While submitting his idea he meets a mysterious young girl, Athena (Raffey Cassidy) who leads him to Tomorrowland. The movie is packed full of stunning visual effects crafted for IMAX and 4K projectors. The story brings in Casey Newton (Britt Robertson) after an abrupt stop in young Franks storyline. A young Casey is introduced just long enough to show her love of science and the possibilities of the universe. Fast forward to her early twenties and we are shown a rebellious for a cause side of her character mixed with a montage hinting at her impressive intellect.

Enter the Tomorrowland pin or button. She comes into possession of this pin that when touched transports her visually to another reality while physically remaining in our world. This event begins her journey to find out what and why this world or future has been shown to her. Reluctantly she joins forces with Athena to track down an important person needed to solve the unknown dilemma. An older Frank Walker (George Clooney) has changed from an optimistic youth to a spiteful old man who has no hope for the future or Tomorrowland. The trio sets forth on an interdimensional journey ending in Tomorrowland. 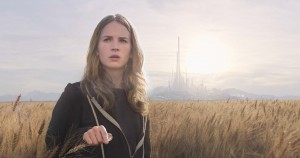 Throughout the movie, we get glimpses of the state of the world and how there is trouble ahead ranging from extreme climate conditions such as droughts, famine and wars. Near the end of the movie, there is a plea to humanity (and the viewer) to change the way we ignore all the signs that our world is falling apart. It ends with a hopeful message preparing future generations to make the changes needed to save the world and Tomorrowland. With many questions left unanswered at the end such as how did they actually prevent the end of the world, it leaves one to wonder if there will be sequels.

If you’re looking for a good movie to take the family to this weekend, Tomorrowland is a good choice. If you love movies that cater to your inner child, it’s a great choice especially seeing how Star Wars references and Disneyland in the 60’s are thrown into the mix to add to the nostalgia. Seeking a movie with amazing plot and character development with superb acting, you might want to check out something else!