WARNER BROS. STUDIO TOUR IS A CELEBRATION OF POP CULTURE PAST AND PRESENT

For the modest price of $62, one can take a guided tour of the world famous Warner Brothers Studio in Burbank, CA. Upon arrival, guests are taken into a small screening room where a film is shown with clips of WB classics over the years, foreshadowing some of the stages and sets that will be highlighted on the journey.

After the film a tour guide comes out and leads guests to a small tram that takes them around the back lot. The guide will ask if there are any specific WB productions that the guests are interested in, and depending on what’s filming that day the guide will customize the tour to what the people want to see.

Along the way you’ll get some history about the studio. It was founded by four brothers; Harry, Albert, Sam, and Jack Warner who began in the projection business and then moved West to set up a major film studio. Initially settling in on Sunset Blvd in 1918, the brothers used the early financial success of their first film star, German shepherd Rin Tin Tin, to purchase the Vitagraph Company, allowing them to produce motion pictures with sound and dialogue. The Jazz Singer was the first “talkie” that they produced and it turned out to be a smash hit, so much so that after a few more talkies Warner Bros. packed up and moved to Burbank where they are located to this day. But enough about the past, let’s get to the present.

Warner Bros. Studio spans across 114 acres and is home to 30 soundstages and 14 exterior sets. Some exterior sets included in the tour are; a large wooded area known as “The Jungle” which played host to Merlotte’s Bar and Grill in True Blood, a suburban neighborhood dubbed Warner Village that is both home to character’s from Pretty Little Liars and Mike and Molly as well as being production offices for those shows, and a town square known as Anywhere, USA as it can double for most rural American towns, most notably in Gilmore Girls. 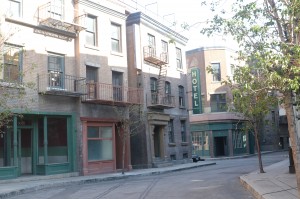 But the sets aren’t just limited to outside; a couple shows are always on hiatus so the tour is able to go into those sound stages where multiple sets stood. On this particular tour, Pretty Little Liars soundstage was featured, allowing guests to walk around The Brew coffee shop and the interior of Rosewood High School. Fans of The Big Bang Theory will be excited as you can sit in the studio audience section and view all of the sets, however to view a taping a separate ticket is required.

Aside from the sets and soundstages, there is a lot more to see along the tour. One soundstage was dedicated to housing all of the hero vehicles used in the multiple Batman series, including “The Screamer” from the new Batman v Superman: Dawn of Justice, nicknamed for the sound it makes when traveling at its top speed of 220 MPH. Afterwards guests will travel through a giant prop warehouse that is the size of four football fields spread over four floors and organized by similarity. Any production, Warner Bros or not, can rent props from here, in fact any body can rent WB props for any reason as long as they pay the fee and insurance. 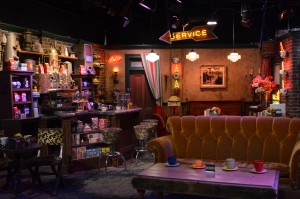 The famous Central Perk from Friends.

Given that the most expensive item was a pair of Tiffany chandeliers valued at $1.2M each, not everything is available to the common man looking for a fun themed party, but it’s pretty cool nonetheless. Finally guests are taken to a museum that features a ton of memorabilia on two floors. The first is 75 years of Batman and featured every Batman mask and suit from the television days of Adam West and each movie from Michael Keaton’s to next year’s Ben Affleck, as well as villain and sidekick apparel. Upstairs has costumes and props from all of the Harry Potter films including a Sorting Hat that will sort guests to their proper Hogwarts House.

If all of that wasn’t enough, things wrap up at Stage 48, an interactive script to screen experience that showcases how films go from the writing process through production and into post-production. Here guests will get an opportunity to take pictures on the set of Central Perk from Friends and Bilbo’s dining table from The Hobbit, design their own Batmobile and wardrobe, as well as be featured in a movie riding the Batpod or a wizard broom. Wrapping up after three entertaining hours, the Warner Bros Studio Tour is a must for fans of CW shows and Batman as well as any film buff, be they a resident of or visitor to L.A. Just beware of the Animaniacs in the water tower.

Get your tickets for the WB Studio Tour.