WE’VE GOT THE SCOOP ON FOX’S ROSEWOOD

Fox is about to release an exciting fall season with some fresh faces, as well as ones we can’t get enough of like Morris Chestnut in Rosewood.

Rosewood is not your typical procedural show.  With a little humor, a probing mother, a fatal illness and a bubbling romance; a clear focus is placed on the relationships between the characters.

Lorraine Toussaint (Orange is the New Black) who plays Donna, Rosewood’s mother, leaves no room for secrets between her and her son.  Their conversations regularly involve questions about his love life or lack thereof.  To add to the family, Gabrielle Dennis (The Game) plays Rosewood’s sister Pippy who is engaged to Tara Milly Izikoff aka TMI, played by Anna Konkle (Betas).  The two characters also work with Rosewood at his practice.

The interracial, lesbian couple adds another layer to the show, but surprisingly does not become the f 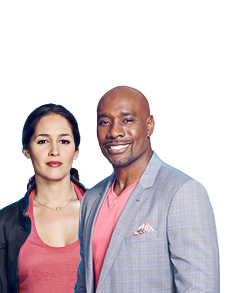 ocus.  The intention is to present the modern day family without beating the viewer over the head.  “This is the face of new families,” Toussaint says. “As artists we are advocates for change. We bring about change.  I stand for the face of new families,” she adds.  Domenick Lombardozzi (The Wire) completes the cast as Miami PD’s Captain Ira Hornstock who is responsible for bringing Detective Villa on board.  With seven kids and three divorces,  Hornstock is great at running his division, but could use some help in his personal life.

The off-screen relationships are just as tightly knit as the on-screen.  Chestnut says, “Having Lorraine Toussaint as my mom is phenomenal.”  He adds, “She’s an incredible actress.”  Toussaint is just as delighted.  “Gabrielle and Morris are so lovely.  I would be so lucky to have children like that,” she says.  Ortiz, who is fairly a newcomer, says the energy is great between the cast, crew and writers.  She never felt out of place.  “When I met him [Chestnut], I felt like I have known him for years,” she says. “He never made me feel like I was a newbie,” says Ortiz.    Working with Chestnut and his big, bright smile probably wouldn’t be hard for anyone, but when Ortiz found out she would be playing opposite Chestnut she says, “I had a heart attack.” Laughing, she says, “Just kidding.”