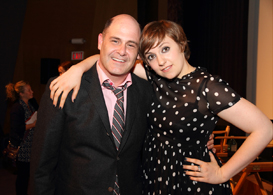 The Writers Guild Theater was packed last night as droves of writers, students, and fans made their way to Sublime Primetime, a panel discussion presented by Writers Guild of America West and The Writers Guild Foundation. Only four days before the 64th Primetime Emmy Awards, heart rates are racing around Hollywood as we approach the show that will tell us who the Academy of Television Arts & Sciences voted the best creative minds in the business.

But if any of the eight panelists were nervous about Sunday’s show, they certainly didn’t show it. Moderator Glen Mazzara (The Walking Dead) wouldn’t let them, telling jokes poking fun at some one Hollywood’s brightest and best. To Matt Weiner (Mad Men) has asked:

“How many Emmys do you have?” Weiner bashfully replied, “Nine.”

“And none for Becker…” The crowd cracked up and Weiner responded, “I have a Purple Heart.”

Mad Men could win an unprecedented fifth consecutive Best Drama Series Emmy this Sunday, and nominee Semi Chellas, a newbie to the show this season who hails from Canada, admitted she has no idea what she’s going to wear since she got the job and flew to LA with less than two days notice. Weiner warned her this isn’t the Canadian Emmys and she needs to look nice. “No boots!”

But while Weiner admitted his superstitions about the show, and his love of every episode equally (like every good father should), he attributed much of his success to following in the shoes of David Chase, his mentor on The Sopranos.

Lena Dunham (Girls), easily the youngest on the panel at only 26, is nominated for four Emmys: writing, acting, directing, and Best Comedy Series. Mazzara didn’t shy away from asking her the question on many people’s minds: if she had to win only one (and it couldn’t be series), which would it be? Dunham admitted that she would choose directing, as it would give her great validation for the part of her craft that she feels least confident.

Howard Gordon (Homeland) sat next to Dunham and commented on a unique tattoo on her wrist that reads “staunch.” She explained it’s in a line from Grey Gardens about a “staunch character.” Later in the night, Dunham would prove her staunchness, explaining how she uses her show to drive forward her political thoughts about woman’s rights issues.

There were many moments of the night when the writers would discuss their process, from explaining a story about pitching or a day in their life, to simply the development process. Alex Gansa (Homeland) explained the differences between Homeland and the original Israeli show from which it was adapted. After admitting he changed the show from two POWs who are brought home as heroes to two POWs who become terrorists, Dunham drew laughs by interjecting, “That isn’t the same show at all!”

Writers Billy Martin and Dave Boone were each nominated for writing the Academy Awards. Martin, who’s been nominated a shocking seventeen times and never won, dryly said, “There is no higher honor than the Emmy nomination. I think the win diminishes it.”

One of the highlights of the night was the peculiar Ted Mann (Hatfields & McCoys), whose odd presence and sometimes-inaudible remarks made him look like a character straight out of his western mini-series. After answering an audience question with a long-winded response about historical accuracy that left the audience scratching their heads, he went on to add simply “Kim Kardashian.”

To have the best writers in the business sit down in one room was a treat. Each brought their own original flair, a taste of their specific genre and specialty. Mazzara was a perfect moderator, asking the right questions and keeping the pace moving. With this combination of interesting personalities, there’s no question why these writers make some of the best and most fascinating stories on television.