WGA’S ‘BEYOND WORDS’ WITH THIS YEAR’S NOMINATED SCREENWRITERS

The Writers Guild Foundation hosted one of my favorite events of the awards season with its annual “Beyond Words” discussion with a panel of WGA-nominated screenwriters.

Hosted by the hilarious Nia Vardalos, whose vivacious personality would make her a perfect candidate to host The View, the panel featured a handful of this year’s best screenwriters.

E. Max Frye (Foxcatcher), who had the most experience of the group, showed it with his dry and often self-deprecating humor. When asked when he knew he would make it in the industry, he responded that it was when he first read scripts written by CAA- and WME-repped writers – and realized just how bad they were!

Dan Gilroy (Nightcrawler) gave us insights on what it’s like coming from an entertainment family, and how fortunate he was to have a film editor brother like John Gilroy (Michael Clayton) and wife Rene Russo who starred in his film.

James Gunn and Nicole Perlman (Guardians of the Galaxy) shared with us their perspectives. Perlman, who spent months on staff at Marvel researching the history of the Marvel universe and diving into the property, once had a job as an assistant to a known felon who liked to participate in nude salsa dancing.

Gunn, a comic book expert since childhood, expressed his exasperation with getting asked the same inane question on Twitter time and time again: How do they power the Walkman in the film? Answer – it’s the future and they can harness traveling through the universe so they would have figured out how to charge a tape player!

Jason Hall (American Sniper) was certainly the most talkative of the bunch (most likely because he sat next to a very flirty moderator). When asked how he reacts to the media’s negative portrayal of Chris Kyle based on his autobiography, Hall defended Kyle, saying that the book was written in a very difficult time directly after Kyle had come back from war. It wasn’t until a few years after had written the book that he was beginning to resemble the person that he once was, which tragically was cut far too short. 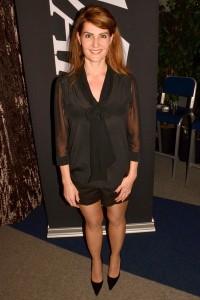 Richard Linklater (Boyhood) described his first job working on an offshore oil rig, a job that was dangerous but provided him enough money to quit and begin writing full time. And Graham Moore (The Imitation Game) explained the day his first book sold and how he had to have his TV writer’s room colleagues lie about where he was when he was gone for hours at a time closing the deal.

These incredibly talented writers shared personal stories and experiences. Stories which reveal that the creativity they place on the page is a product of their lives and their pasts. Being able to witness firsthand these remembered experiences was truly inspiring.