WHAT IT TAKES TO THROW THE EMMYS GOVERNORS BALL

Press Pass LA went behind the scenes of the Emmys Governors Ball which will take place this Sunday, September 20th, immediately following the 67th Emmy Awards. 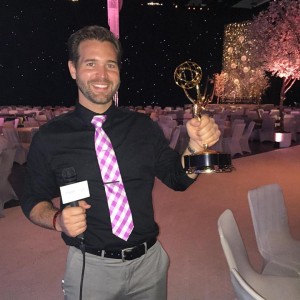 The West Hall of the Los Angeles Convention Center was transformed into a stunning event space themed “Reigning with Radiance,” that will host 4,000 guests after this year’s Emmy Awards. The event is the official Emmys after-party and one of the largest annual sit down dinners in the United States, with the ballroom being the length of one football field and double the width!

The evening will open with performances by JB Project and the WCM Strings and feature a dance performance by Dancing With The Stars alum Maksim Chmerkovskiy.  International superstar Andrea Bocelli and multiple Grammy® and Emmy Award winning producer and songwriter David Foster will headline the evening’s entertainment.

The event, which is being produced by Sequoia Productions, could not be more gorgeous! The “Reigning with Radiance” themed ball features more than 45,000 Swarovski crystals in various sizes featured in over 530 hand-crafted crystal strands weighing close to 450 pounds. Talk about shimmer!

For the fourth year, Emmy recipients will have the opportunity to visit the exclusive “Emmy Winner’s Circle” and have their statuettes personalized. They will also receive a personalized Penfolds Wine. What could be better, an Emmy in one hand and celebratory wine bottle in the other! 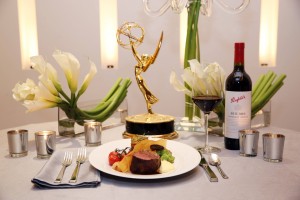 The event is being catered for the 20th year by  Patina Group, under the direction of acclaimed Chef Joachim Splichal and Alex Lustre who have created a three-course menu including a wildflower honey poached forelle pear salad, filet of beef tenderloin, and a single origin ghana brownie, delish!  The food will be served with Penfolds’ Bin 389 Cabernet Shiraz and Bin 311 Chardonnay. Guests will also enjoy chocolates from Cellar Door Chocolates and specialty cocktails fro Patron Tequila.

Watch our video above for your Emmys Governors Ball experience!

Be sure to tune in to the Emmys this Sunday at 8ET/5PT on FOX.