Audiophiles, comedy nerds, and autodidacts will come together this Halloween weekend for one of the best live podcast events of the year.

Hosted in Anaheim, the full three day event will feature more than thirty live podcasts across six stages. Not only will fans get the chance to see their favorite creatives live, but there will be meet and greet opportunities, fan-focused experiential moments and a happy hour lounge. Here’s a preview of what you can expect to see and hear!

Friday 10/28
Trumpcast – Hosted by Jacob Weisberg
Slate Editor-in-Chief talks to psychiatrists and other experts to try and understand who Trump really is and how our country got to the place it’s in now. Scary and informative. 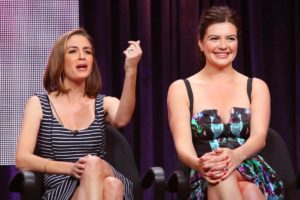 CryBabies – Hosted by Sarah Thyre and Susan Orlean
Do not listen to Crybabies on the way to work, or anyplace you don’t want to be seen sobbing in public. This Earwolf show features writer Susan Orlean (The New Yorker) and actor Sarah Thyre (Late Night with Conan O’Brien) discussing what makes them and their guests cry. These awesome ladies put forth candid conversations with creative types allowing us into public personas’ intimate feelings and emotional triggers. Just try not to cry when Jason Mantzoukas talks about that scene in The Hunger Games when Katniss Everdeen VOLUNTEERS AS TRIBUTE TO SAVE HER SISTER PRIM AND THEY PLAY THE CLIP. Each episode ranges from hilarious to sweet to sad and the show is a wonderful listen.

NPR’s How I Built This – Hosted by Guy Raz
Anyone in need of a little business inspiration should listen to this NPR podcast. Guy chats with some of the word’s most innovative minds about their journeys from failure to foundation. Recent episodes feature the co-founder of Airbnb, Spanx founder, and co-founder of Vice (different people, because that would be crazy).

Never Not Funny – Hosted by Jimmy Pardo
Standup comedian and Conan O’Brien warm-up guy Jimmy Pardo has hosted this award winning podcast since 2006 (aka ahead of the curve before anyone was listening to podcasts). He brings his comedian friends on *cough* Scott Aukerman for unscripted silliness.

The Moth – Hosted by Dan Kennedy
Before The Moth podcast, there was The Moth StorySLAM live storytelling (you may remember this event featured on Girls last season, but these events have been happening since 1997 and well before Lena Dunham got naked on tv). This is the event slash podcast that got me into podcasts. Since 2008 each episode has brought regular people (and sometimes famous people) up on stage to tell true stories, sans notes, based on a theme. Yet another podcast that sometimes makes me ugly cry, but mostly they are just lovely stories about humans. You live in LA. Don’t miss out on witnessing one of these incredibly personal events – you can even volunteer to be a story judge!

Comedy Bang Bang – Hosted by Scott Aukerman
The man hardly needs an introduction, but for all the non-comedy-freaks out there, Scott Aukerman is a fantastic “everyman”. This weekly Earwolf show features Aukerman and an array of comedians navigating a slew of improvised dialogue with wacky characters old and new.

Ronna & Beverly – Hosted by Ronna Glickman and Beverly Ginsberg
Glickman and Beverly are the wild Jewish mothers you never had (or maybe you’re Jewish and get plenty of attention from your lovely mother who just wants you to eat more). These Boston gals give their spin on relationship advice and interview their celebrity guests with vigor. Check out their book You’ll Do A Little Better Next Time: A Guide to Marriage and Remarriage for Jewish Singles and see them at UCB in Los Angeles.

I Was There Too – Hosted by Matt Gourley
For anyone who ever wanted to be a fly on the wall of a Star Wars (or Jurassic Park or The Shawshank Redemption or…) set, this is the show for you. Host Matt Gourley (Drunk History, Superego) interviews the people who had small parts in big films. 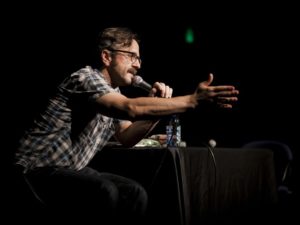 WTF with Marc Maron – Behind the Scenes – Hosted by Marc Maron
The entertainingly self-critical Marc Maron hosts one of the most beloved interview podcasts around, though he wants you to know that they are less interviews and more conversations. He weaves personal experience with his guests (think SNL, HBO, stand up comics, musicians, and so forth) and has a natural flow of conversation. Marc typically brings on guests with something freshly released in theaters, on television, or print and even welcomed President Barack Obama on for an intimate recording in his garage studio in his East Los Angeles home aka Cat Ranch. In this special Now Hear This rendition of Maron’s acclaimed conversational show, fans will get a sneak peek into the process and hear him discuss WTF with producer Brendan McDonald.

Tanis – Hosted by Nic Silver
If you’re a fan of Pacific Northwest Stories, you’re going to want to hop on the Tanis train. This podcast traces the myth of Tanis and taps into the questions about nature, truth, and conspiracy via Silver’s wondrous and soothing voice.

Lore – Hosted by Aaron Mahnke
This chilling bi-weekly podcast chases historical tales of tragedy and bizarre happenings, and gives insight into where some of our wildest superstitions come from.

Cracked – Hosted by Jack O’Brien and Michael Swaim
The Cracked Podcast stems from the editorial section of the website that discusses a wealth of topics, ranging from pop culture to common misconceptions about the world in which we live. Every episode also features a thematically musical tie-in selected by O’Brien.

Hello from the Magic Tavern – Hosted by Arnie Niekamp
Set in the fictional world of Foon, this totally improvised comedy podcast touts a pretend Niekamp who fell into another dimension in Chicago. He and his co-hosts interview a bunch of magical creatures and the show was named one of the Best Podcasts of 2015 by iTunes.

With Special Guest Lauren Lapkus – Hosted by her guests
In this hilarious podcast, Lauren Lapkus brings guests on the show where the roles are reversed and her guest leads a conversation with Lapkus, improvising a one of a kind character. You may recognize her from Orange is the New Black, but Lapkus is a comedy queen around LA and you can see her long form improv team Wild Horses at UCB in Hollywood. 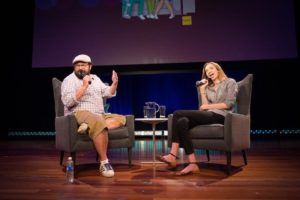 Found – Hosted by Davy Rothbart and guest Starlee Kine
Essentially Craigslist’s Missed Connections in podcast form, Rothbart solves the mysteries behind found notes and follows stories of love, loss and hope. He also encourages fans of his work to join the global community project via the FOUND app for iOS where users can follow stories in real time and help discover the unknown. Get outside, people.

Hollywood Handbook – Hosted by Hayes Davenport and Sean Clements
In this original Howl podcast, comedy writers Davenport (Family Guy, Vice Principals) and Clements (Parks and Recreation, The Grinder) give listeners the “insider’s guide to kicking butt and dropping names in the red carpet lined back hallways of this industry we call showbiz”. Take what you will from that description.

Improv4humans – Hosted by Matt Besser
Matt Besser, one of the original four improvisers and founders of the acclaimed Upright Citizens Brigade (UCB) hosts this fully improvised Earwolf show that often incorporates musical guests,call-in interviews, man on the street interviews, and YouTube videos. Go see him in Asssscat – you never know who might show up.

Doug Loves Movies – Hosted by Doug Benson
It’s all in the title. This comedian (Last Comic Standing, Super High Me) LOVES movies. If you don’t want to listen to him talk about film, check out his video podcast Getting Doug with High.

The Gist – Hosted by Mike Pesca
If you only have a few minutes to brush up on your news and pop culture, head to The Gist. These short segments from Slate’s Panoply Network are digestible for your commute.

Dear Prudence – Hosted by Mallory Ortberg
Originally a Slate column, this advice show covers everything from work life, to home life, love and all the rest. Guest Samantha Powell will join Ortberg for the live show.

NPR’s Pop Culture Happy Hour -hosted by Linda Holmes
This weekly show is a roundtable type chat from NPR focused on all of the lovely pop culture topics we can’t stop talking about. Holmes will usually bring on a character or two to join in the discussions.

NPR’s Embedded – Hosted by Kelly McEvers
McEvers takes everyday news stories and digs deep into the meat of them to uncover personal details instead of just the breadth of coverage.

Criminal – Hosted by Phoebe Judge
While Serial may have made true crime and podcasts less niche, Criminal was on the map well before. With a producing background in public radio, Judge and co-creators Lauren Spohrer and Eric Mennel take listeners through eerie true stories.

How Did This Get Made – Hosted by Paul Scheer, June Diane Raphael, and Jason Mantzoukas
How Did This Get Made is the show that everyone can relate to because all it does is make fun of ridiculous films. Remember Lake Placid? Sleepaway Camp?! Comedians Scheer, Raphael, and Mantzoukas watch the most outlandish movies and question their plot, budgets and existence so you don’t have to.

Worst Idea of All Time – Hosted by Guy Montgomery and Tim Batt
This podcast started off with two guys watching and reviewing Grown Ups 2 every week for a year. The next year, they did Sex and The City 2, and the most recent season is up with We Are Your Friends– every week. They somehow pulled this off with enough content to gain the attention of VICE, The AV Club and The Guardian.

Spontaneanation – Hosted by Paul F. Tompkins
The beloved Tompkins takes listeners on a fascinating ride through a totally improvised show beginning with a monologue, segueing into interviews and finishing off with narrative sketch.

Now that you made it to the bottom of this insane list of unbelievable talent, make sure you get your tickets for this weekend NOW before they sell out! If you can’t make it to the event, be sure to check out the podcasts wherever you consume them and try to hit up a live show! UCB and The Moth are where it’s at.