Whiskey Tango Foxtrot isn’t a perfect film but it is easily one of the best journalism movies ever made. The film, which follows Tina Fey as real life war correspondent Kim Barker, is an amazing and often funny look at the daily lives of the reporters that risk life and limb to bring us the news.

Based on the book “The Taliban Shuffle: Strange Days in Afghanistan and Pakistan” Fey plays Barker as an everywoman that is in over her head in a dangerous, foreign country where women are seen as second class citizens. Her determination to be seen as an equal by the military and her colleagues pushes her to the fringes of the war and into places other journalists might not be brave enough to pursue. 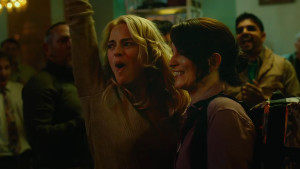 As much as this is marketed as a Tina Fey movie it really is an ensemble piece filled with a fantastic international cast. Once embedded into the military base in Kabul, Afghanistan she quickly becomes friends with her fellow journalists Tanya Vanderpoel (played wonderfully by Margot Robbie) and Iain MacKelpie (Martin Freeman). The chemistry between everyone feels real and organic to the point where the audience never once questions the journalistic integrity of the cast.

Hopefully this film works as a showcase for both the talents of Fey and Robbie. Both play against-type and really shine against in the rough environment of the Middle East. She might be a pretty face but Robbie has shown time and again that she has the acting chops to pull off just about any role.

Though it does take a little while for the movie to find its groove once it gets to the heart of the story it becomes gripping and offbeat tale. In an era of Zero Dark Thirty and The Hurt Locker it is kind of nice to see a film about modern war that doesn’t take itself too seriously. Let’s be clear, there are moments of extreme danger and violence throughout the film, but that doesn’t take away from its humor. At its best Whiskey Tango Foxtrot feels like a modern day companion to Robert Altman’s MASH.