With over 200 million album sales worldwide, Whitney Houston was the only artist to chart seven consecutive US No.1 Singles.

Groomed for superstardom by her mother, singer Cissy Houston, Whitney Houston first wowed crowds at the age of 11, singing gospel music in Newark’s New Hope Baptist Church.  After her parents divorced, Houston left home to work as a model in New York City.  There she caught the attention of top record company executives, including Arista Records President Clive Davis.  Stunned by her charisma and phenomenal voice, Davis signed the 19-year old Whitney and guided her first album to smash hit success in 1985, starting with the release of her first hit “Saving all My Love for you”.  Houston scored six more consecutive N1 singles, seven Grammy Awards and starring role in the 1992 blockbuster “The Bodyguard” which featured her smash-hit ballad “I will always love you”.  But Houston’s brilliant career gradually gave way to erratic behavior, scandals and finally death at age 48. 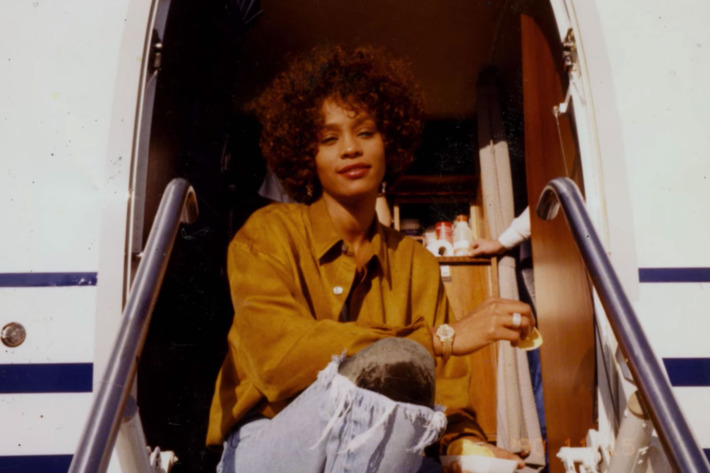 The documentary was produced by a stellar team, including Lisa Erspamer, who was a co-executive producer of “The Oprah Winfrey Show”, Patricia Houston, who is Whitney Houston’s sister-in-law and executor of Whitney Houston’s estate and two-time Oscar Winner Simon Chinn.

Patricia Houston said “Whitney herself back in 1999 started to do a documentary, started filming, so we knew that she wanted to do a documentary.  That was the reason for the continuation.”  She added “Whitney’s life mirrored all of ours.  We deal with triumphs and tragedies, love and disappointment, joy and pain.  She did too.  It’s a human story.”

Over the period of 2 years of researching for the film, MacDonald ended up with a lot of material that he has to ultimately cut down to the 2-hour length film.  PressPassLA asked him what was left out that he would have liked to include in the film.  MacDonald said “You have to make choices about what ultimately, for you as a filmmaker, are the most important things to include, and by that I mean what represent her life and her career the best.  So it does mean leaving out a lot of great stuff but we can’t include it all.  I would have liked maybe to have a bit more context of Whitney’s family, perhaps the gospel influence, where Whitney’s parents came from.  All of that I would really like to do more but for a feature film, we have kept in as much as we could.”

The film is an intimate, unflinching portrait of Houston’s life.  “My purpose is to make this film about Whitney as honest as possible, with access to the people that knew her, so that by the time people have seen this film, hopefully people won’t feel so much the need to pry anymore into her private life because there it all is” – said Macdonald  “and then you can turn to the music and say “that’s what left”.  We can stop the conspiracy theories and the gossips and turn to what survived her which is the music.”