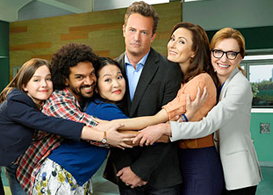 One of the hardest things to write about in this day and age is someone dealing with mental conditions and issues. It is a very fine line to walk but that said, NBC’s new sitcom Go On starring Matthew Perry does what it can to tread that line and does a fine job too!

The dilemma facing shows which tackle mental illness is that if you don’t handle the topic with the utmost respect you risk alienating, even offending your audience. Likewise, if you don’t make it a point to demonstrate the hardships, then there will be those who feel as though you are making light of a real problem or possibly even making it as though there is a complete absence of conflict (and no point of even having a story in the first place).  Go On manages to handle these hurdles and deliver a show that is enjoyable.

Matthew Perry is the star of this show, a hit sportscaster named Ryan King. King has a good life, that is until his wife dies in a fatal car accident while text messaging. While dealing with this brutal tragedy, he is speaking on the phone with Terrell Owens who admits to driving while texting, making King flip out completely. His boss Steven, played by John Cho, insists that he enter into group therapy. How he deals with his own personal problems while interacting with the members of his group who each have their quirks is the backbone of this comedy.

The pilot is about what you’d expect out of a pilot; we are given a major plot point, which will act as the main story for the remainder of the first season. The audience is shown the core of the main characters; in this case King, Steven, the group therapy leader and each of the members of the group. We are given brief but entertaining back stories of each one so that, when there is a story about them, the audience will have additional emotional investment. There isn’t much to be said about it beyond the quality of the content.

With Scott Silveri at the helm, it is apparent that he is going to be sticking to a formula that works. Matthew Perry has been charged to unofficially reprise his Chandler Bing character from Friends, and it is one that is very natural albeit frustratingly cliché of him. It is clear that he is a talented actor, but he isn’t given any room to expand and build on those talents. Each of the characters is quite natural and the story is both comical while tugging at the heartstrings of the audience.

The second episode deals more with King’s professional life as it is inexorably intertwined with his personal turmoil. Unable to face the emptiness of his house, he stays at work late at night and, not wanting to wait alone, makes his administrative assistant Carrie stay and work late with him, only to socialize with her. At the same time, one of the characters from the group Sonia, played by Sarah Baker, is told that since she isn’t happy in her relationship with her boyfriend to break up with him at King’s behest. As a result, she then turns to cats to return her feelings of love and hope for a complete relationship; more than just a few.

The reason this episode works is because we are shown, both through tragedy and through comedy, what can happen to different people when they have lost someone that they love, regardless of the context. King can’t handle the loneliness of losing his wife, so he wraps himself up in work and, when that proves frustrating and tedious, all but forces his assistant to fill that gap. When Sonia breaks up with her boyfriend, she can’t handle the idea of not having someone love her completely – a feeling being constantly fed by her neurosis – so she gets cat after cat after cat to attempt to establish a relationship of total love and total trust. Both show the vulnerable sides that exist within us all to a comical extent without entering into the realm of offensive parody.

The reason the show doesn’t really work is the same pitfall that seems to befall most sitcoms since Seinfeld; nothing really happens. Instead of something truly deep or impactful happening to the characters that will carry over from episode to episode – save the incident with King’s wife, of course – we aren’t given anything that would create a truly episodic television show. Instead of having a story driven narratives, we are just given characters with eccentricities put into regular situations so that they can expose the nonsensical nature of our day-to-day lives from their own warped perspectives.

It is still too early to provide too much or too little praise for the show as a whole; the writing is sound but slightly cliché, the acting is great and natural and the characters are both sympathetic and interesting. With a few story arcs and a tweaks, it will be something great. Something that at this point Matthew Perry desperately needs in what could be considered the twilight of his mainstay television career.