The film stars male lead Hideaki Anno as Jiro Horikoshi who dreams about flying planes inspired by the famous Italian aeronautical designer Caproni. Jiro is unable to become a pilot because of his vision, so instead he becomes one of the worlds most “innovative and accomplished airplane designers.”

Produced by Toshio Suzuki and directed by Hayao Miyazaki, Miyazaki says that this is an “epic tale of love, perseverance and the challenge of living and making choices in a turbulent world.”

The Wind Rises was meant as a tribute to engineer Jiro Horikoshi and is for limited release in North American theaters on Feb. 21, 2014 and expanded to release on Feb. 28, 2014 under the Touchstone Pictures banner. This movie is an inspiration and a definite must see! 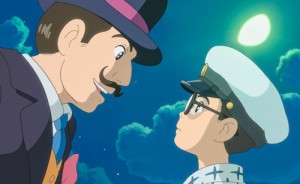