Despite switching its location from Anaheim to Los Angeles, WonderCon still brought more than enough pop culture love to last its attendees until the San Diego Comic Convention in a few months.

The old saying is true; if you build it they will come. And come they did, by the millions into the Los Angeles Convention Center. The three day event is a celebration of all things pop culture from obscure comic books to panels filled with your favorite television and movie stars. 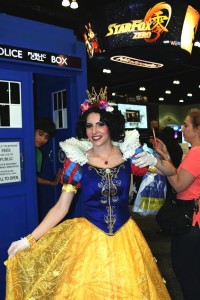 For those that have never been pop culture conventions like WonderCon, SDCC and C2E2 really are a unique experience. Outside of sports events you’ll never find a more dedicated group of people that are truly dedicated to what they love. But while spots fans may fight among themselves over who is superior that kind of division doesn’t exist at these events. Walking through the convention hall it is not uncommon for total strangers to greet each other with hugs and smiles at their shared interests.

There is no better way to show your love for something than through cosplay and WonderCon had a plethora of amazing costumes on display through the weekend. From a fully functional, homemade Transformers costume to movie level makeup the cosplayers of WonderCon proved just how powerful cosplay culture has become over the years. Nearly a decade ago only a select few, the truly passionate, would dress up to conventions. Now geek culture has become so accepted among the masses that everyone joins in the fun. The show allows you to embrace who you really want to be no matter who that is, without judgement.

But the fans are there for the action, not just each other. WonderCon saw the debut of new footage from DC’s Legends of Tomorrow TV show, an early screening of Justice League vs. Teen Titans and so much more. The panels and screenings allowed fans to get up close and personal with those involved in their favorite productions, whether it be film or comic books.

In years past the biggest name each year has usually been Marvel but this year DC Comics was on everyone’s minds and mouths. The release of Batman v. Superman the same weekend as well as more than a few panels at the show may have had something to do with that. For the first time in more than a decade Marvel took a backseat. Now all that is likely to change next month once Captain America: Civil War is released but for the time being DC Comics received some well-deserved respect.
While it was great having WonderCon in Los Angeles the show is slated to return back to its normal location in Anaheim next year. If anything, the temporary move gave Angelinos a taste of geek love that they usually have to travel to see.