This past weekend, March 31 to April 27, 2017, found a confederacy of cosplayers, comic book fans, and pop culture connoisseurs flanking WonderCon 2017 as it returns home to the Anaheim Convention Center.

For the uninitiated, it is an annual comic book, science fiction, and film assemblage that began in 1987, growing into one of the most popular pop culture conventions for the geek/nerd community. A sister to the massive San Diego Comic-Con International, in comparison, WonderCon is not nearly as crowded. Despite it’s small size, it offers visitors access to a large number of industry leaders and professionals, as well as the chance to attend a few high-quality panels, to catch sneak peeks in their favored franchises.

This year the three-day pop culture celebration attracted an upward of 60,000 guests. These numbers may not seem impressive, but when the closest lot is being used for “The Happiest Place on Earth,” parking easily is a challenge. Come early to find a spot, try to sweet talk the parking guards at Disneyland, otherwise cosplayers find themselves riding the shuttle from Angel Stadium’s parking lot. Soon, however, the frustration of a long trek wears off, as a wave of “worth it” hits, when walking up to the fountain, past the cosplayers on display.

Upon entering the exhibit hall, participants view a seamless blend of large corporate publishers, such as DC Entertainment and Dark Horse Comics with independent companies, such as private book publishers at the Small Press area, and individual creators at Artists’ Alley. Booths that particularly interested cosplayers include colorful wigs, steampunk corsets, and even a variety of contact lenses.

For seasoned attendees, exclusives are the name of the game for Friday. The 2017 issue of the WonderCon guide featured a plethora of DC characters in their Golden Age design, which new followers may quickly recognize as superheros from the hit shows in The CW’s Arrow, The Flash, Supergirl, and DC’s Legends of Tomorrow. The same design can be found on the WonderCon exclusive shirts. Mission Viejo Library had a booth, offering a free WonderCon exclusive library card designed by Disney Story artist Brian Kesinger. Other exclusives worth seeking out was a special edition Batman/TMNT Adventures #5 comic featuring a variant black and white cover by Kevin Eastman and a zombie pinup poster titled “Not a Biter” by artist Ruben Rosas. Exclusives that miss the mark, however, were a rather gaudy  tiki mug and glorified stickers which were advertised as phone decals. 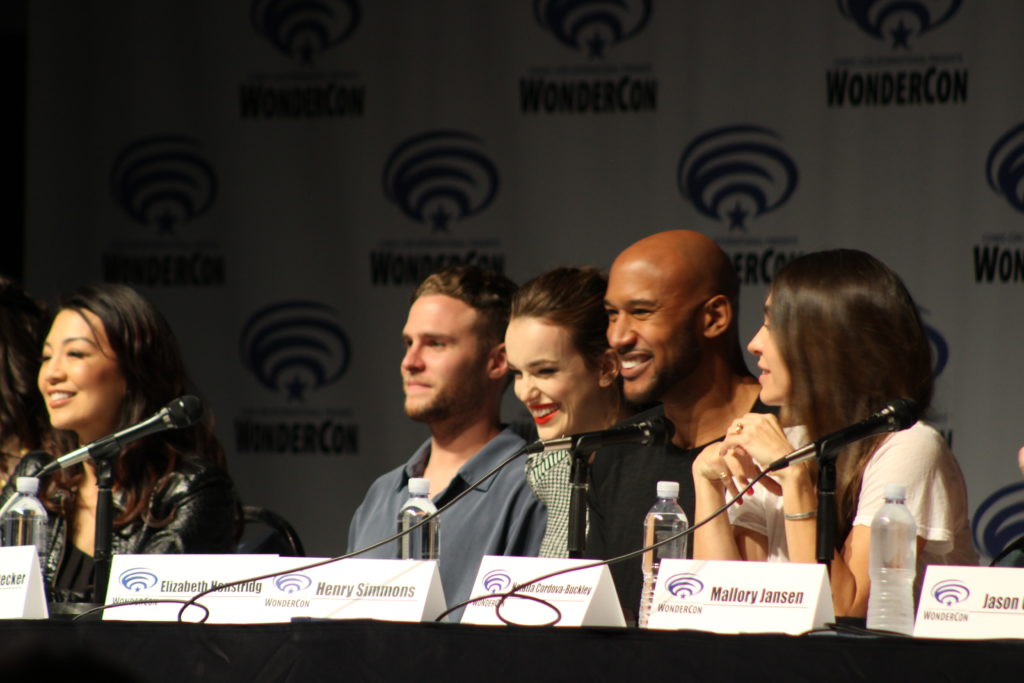 Often the busiest day, Saturday, featured not only large panels such as Riverdale, Syfy’s The Magicians, and Marvel’s Agents of S.H.I.E.L.D., but skill building panels on learning the artistry of cosplay makeup, to stop-motion puppet-making. Convention vets know to skip the amazing food trucks (they already tried them Friday), and bring their own snacks, as Saturday is usually sold out and lines are even longer. While snacking on homemade sandwiches, sit by the water fountain in the middle of the square and bask in the sun and the cosplay.

Surprising to the rest of the world, geeks party into the night. Saturday evening saw the first 100 revelers receiving two styles of limited edition posters at the Sunset Deck in the Hilton to celebrate 10 years of the comic book company, comiXology. Party-goers  were treated with food, drinks, and a chance to mingle with CEO David Steinberger. The after hours also included the amazing Masquerade. Not a dance, which the name may imply, but instead a stage show where guests get to entertain audiences with their cosplay, accompanied by theater-style lighting, sound-stage music, and an HD video screen.

What made WonderCon 2017 bittersweet for the fans, however, was a community driven Sunday panel. Jedis and Siths banned together to focus a final farewell to the late Carrie Fisher, beloved for her role as the female protagonist, Princess Leia Organa from Star Wars. Admirers and mourners wore the most intricate and endearing cosplay, to honour their fallen hero. The hosts, Rebel Legion, Mandalorian Mercs, R2 Builders, and the 501st Legion all shared their personal stories of how she touched their lives and their hearts.

No matter what day a newbie arrives for, there is always an abundance of cosplay. From the complex to the quint. The difference from the WonderCon cosplay, compared to larger conventions, however, are the family and group cosplay ideas. This year featured many father-daughter duos as Old Man Logan and Laura from the movie Logan.

Although the show just ended, the dates for next year’s WonderCon are Friday, March 23 to Sunday March 25, 2018. For anyone interested in featuring a booth in the hall, applications are now open for exhibitors. This will be one of the rare conventions a smaller crew can hope to be seen on the convention floor.