“Into the Woods” Comes to the Ahmanson Theatre

On Wednesday April 5, the stage at Center Theatre Group’s Ahmanson Theatre was graced with a simple, yet spectacular production for the ages. This production of the popular Stephen Sondheim classic, “Into the Woods” was originally mounted by the critically acclaimed Fiasco Theatre Company in New York, where it was produced Off Broadway, winning the 2015 Lucille Lortel Award for Best Revival of a Musical.

The musical tells the story of a poor Baker and his wife, who wish more than anything to have a child of their own. It is revealed to them by their neighbor, the Witch, that she is the reason they are both barren; Many years ago she placed a curse on the Baker’s house as revenge against his father, who had been caught stealing greens from the Witch’s garden. She offers a bargain to lift the curse if they can bring her four items the nearby woods: The cow as white as milk, the cape as red as blood, the hair as yellow as corn, and the slipper as pure as gold.  During their journey, the Baker and his wife encourager several characters from various fairytales including Little Red Riding Hood, the Big Bad Wolf, Rapunzel, Cinderella, Prince Charming, and young lad named Jack who has a real knack for climbing beanstalks. 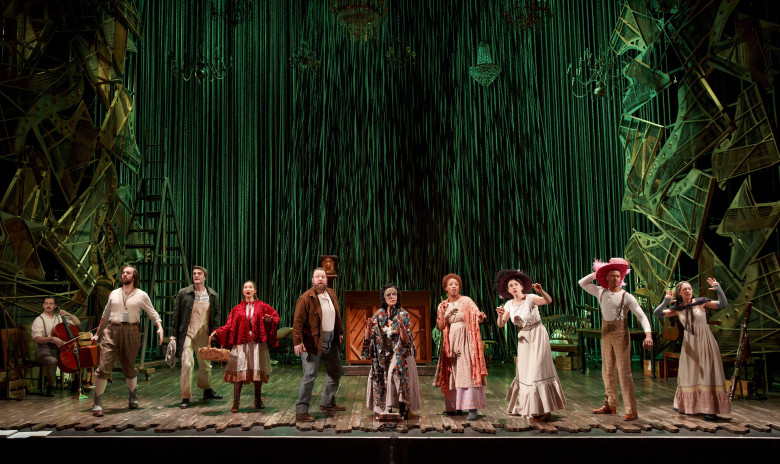 The incredibly talented cast is led by Evan Harrington as the eager yet troubled Baker, Eleasha Gamble as the Baker’s Wife, Stephanie Umoh as the conniving and sinister Witch, and Fred Rose as the Mysterious Man narrating the tale. Actors doubling and occasionally tripling up on roles include Lisa Helmi Johanson (Little Red Riding Hood/Rapunzel), Patrick Mulryan (Jack/Steward), Laurie Veldheer (Cinderella/Granny), Bonne Kramer (Cinderella’s Stepmother/Jack’s Mother), Anthony Chatmon II (Lucinda/Wolf/Cinderella’s Prince), and Darick Pead (Milky White/Florinda/Rapunzel’s Prince). Completing the cast is the show’s musical director Evan Rees as the Pianist, whom is not traditionally a character within the play, but serve as the entire backbone of this production by providing the accompaniment. It also worth noting that all 11 members of the cast also serve as the orchestra at different points in the show, all playing their own instruments. 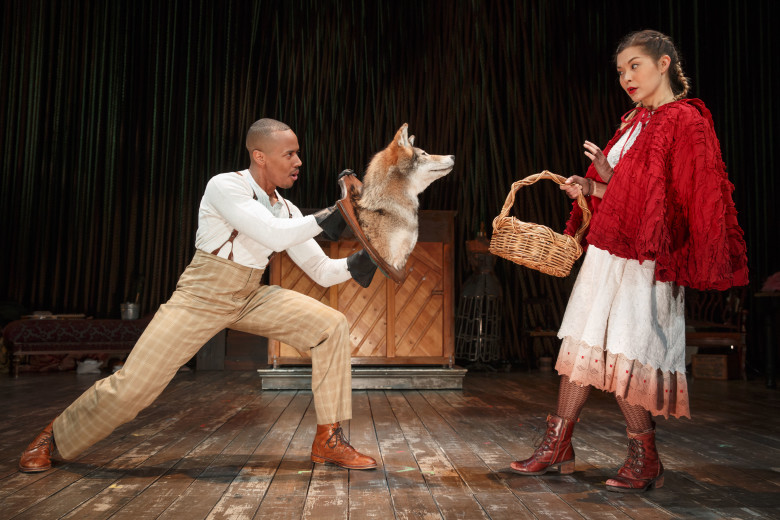 The scenic design, crafted beautifully by Derek McLane is pretty bare bones with the stage mostly empty save for the piano center stage and a ladder that serves as both Rapunzel’s tower and Jack’s beanstalk. The proscenium is outlined with piano keys, which can be viewed as a way to tell the audience that the piano will be serving as the groundwork for the show’s score rather than a full orchestra like most musicals.

Whether it’s from Little Red’s exuberant perkiness, the Prince’s’ hilarious laments, or the Witch’s explosive 11 o’clock number “Last Midnight”, Fiasco Theatre’s “Into the Woods” is guaranteed to have  patrons of all ages leaving with a smile on their face.

“Into the Woods” is playing at the Ahmanson Theatre through May 14,2017. Tickets can be purchased at www.centertheatregroup.org.