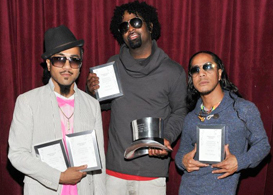 Many people now have a greater appreciation for the art of dance. With so many television shows revolved around dance competitions such as Dancing With The Stars, So You Think You Can Dance and America’s Best Dance Crew, it was long overdue for there to be an awards show dedicated to the talented dancers of the world. This week, we got to attend the 2nd Annual World Dance Awards honoring the best in Choreography.

The Awards ceremony was held at The Key Club in Hollywood and hosted by Robert Hoffman and Cris Judd. In between the award announcements were amazing dance performances that really made us appreciate the talent and passion that these dancers have for their craft.

There were two hilarious moments in the show. One was when Robert came out in a floor length, turquoise gown. The second was when Cris and Robert treated us to a performance of the latest dance craze “Gangnam Style” by South Korean rapper, Psy. The crowd loved it and stood to their feet! There were six categories for the awards. Below are the winners of each category:

Gustavo Vargas – So You Think You Can Dance: Salsa

Choreographer – Galen Hooks – The LXD: The Rise of the Drifts