The Wrap celebrated its 5th Anniversary by hosting a lavish event at Culina Restaurant, located at the Four Seasons in Beverly Hills. Preparing for one of Hollywood’s biggest nights, Oscar nominees and entertainment industry power players came out to help them celebrate.

We chatted with CEO/Editor-in-Chief, Sharon Waxman about The Wrap’s success and she said, “The Wrap is the leading, entertainment news site for the entertainment industry, so we are what people get up in the morning to read. We talk to them all day long through the site, through their email; you know we have a magazine, so that’s the role we play. The future for The Wrap…I mean we just hit our stride. We grew 500% last year. So we are running to catch up with our world. I feel like we have really earned our place at the table with a conversation for Hollywood. We want to really serve the industry and be there to be a partner for them to inform. You’re going to see The Wrap become a really big brand. We’re going to be around for the next five years for sure.”

We asked several people about their Oscars predictions to win for Best Picture and the majority said, 12 Years a Slave. Actor, Dennis Haysbert said, “They are all great! There are some excellent movies. But if I had to go with one, in my gut, I would have to say, 12 Years a Slave. In saying that, they all resonated with me. “Her” was especially good. Dallas Buyers Club was incredible. Dennis’ fans will soon catch him in the upcoming movies, Think Like a Man 2, Sin City 2,  and Mr. Peabody and Sherman. 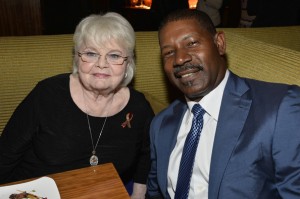 We wish all the nominees the best of luck and we look forward to watching The 86th Academy Awards this Sunday! To learn more, visit The Wrap.com