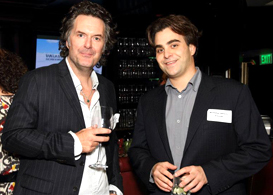 Press Pass LA had the pleasure of attending the Fall-Winter Reception for the Writers Guild of America, West held at a private room at the Capital Grille in Beverly Hills. The low-key event offered an upscale setting with a casual feel for screenwriters to mingle, discuss, and celebrate the hits of the season.

This was not your typical press event- there was no red carpet, no formal press check-in, and no slew of photographers but make no mistake, the event was certainly A-list. It was a chance for established screenwriters and next-gen writers to commiserate about the perfect script, writer’s block, and the development process, and we were lucky enough to be a fly on the wall.

Among the established were household names like Aline Brosh McKenna, best known for The Devil Wears Prada and a few of my personal favorites like Morning Glory and the recent We Bought A Zoo. We only spoke to her briefly as I could barely contain myself from saying that her script 27 Dresses felt like a slice of my life, having been a bridesmaid more times than my closet would like to admit. Robbie Fox, who penned the popular holiday film Playing for Keeps, was among the crowd. I fondly recalled growing up loving his earlier work So I Married an Axe Murderer during my childhood.

You would think in a room full of writers the two toughest men to talk to would be John Gatins, whose film Flight starring Denzel Washington just opened, and Rian Johnson, whose recently released Looper starring Bruce Willis took the box office by storm.  It was just the contrary. Indeed they were a popular pair, but we had the chance to speak with both of them and couldn’t have been more pleased with how humble and talkative they were.

Our reporter T.C. Kress, who attended the reception with me, talked with Gatins about attending the Flight press conference  last week and enjoying the script more so than the finished film (see his Flight review here). I bonded with Gatins over our mutual fear of flying, in fact, we share a similar opposition to being a passenger in a vehicle. “It’s about control”, we agreed. Perhaps, but when it comes to patience, Gatins is in control because he waited almost eleven years to see his film through the development process and onto the big screen. Now there’s a full story waiting to be told!

I sat down with Johnson who, on the contrary, had what most writers would consider a very quick turnaround from page to screen and the chance to both write and direct his film. “I was lucky,” he told us and went on to discuss how great Bruce Willis was to work with on set and his process of working with actors in all stages of their careers.  We mentioned our earlier interview with Summer Qing (who plays Willis’ wife in the film) and he lit up talking about being back on set with his cast saying that “directing is the fun part”. He is already hard at work on his next project.

One writer that could not go unnoticed was John Krasinski, best known as an actor for his role on The Office. Krasinski was in attendance to promote his upcoming film Promise Land which he co-wrote with fellow leading man Matt Damon. Krasinski was joined by his producing partner on the film Mike Sablone.  The film, which revolves around a gas company that makes offers to drill in a rural town that has been struck by economic hardship, is timely and aiming for a release early in the new year.

Other writers of fall films in attendance included Randy Brown who penned the recent Clint Eastwood movie Trouble with the Curve and Nicholas Jarecki who scripted Arbitrage which starred Richard Gere.

As I left the event it occurred to me that maybe I should report on it. I hadn’t recorded any audio, shot any video, or noted any quotes because it wasn’t that type of event. It was a night for screenwriters to enjoy their own company free of expectations or prepped dialogue. And tonight, I felt more like the screenwriting major I was at Syracuse University- the one that sits up late still penning scripts- than the reporter listed on my name tag. Still, I couldn’t help but want to share this wonderful experience with our fans! I look forward to the Spring-Summer Reception already.

Check out our photos courtesy of WGAW.