With an upcoming EP release and a short film hitting the festival circuit, X. ARI’s “Pain Into Power” campaign is boldly tackling issues that many singer/songwriters claim to support, but don’t ever face head-on as part of their art. While it helps that X. ARI’s upcoming EP Dis-Order (May 2018) is a hit maker – one of the strongest releases from an indie artist this year – it is never easy for a young artist to put issues like mental heath awareness at the forefront of their debut. In fact, artists like Demi Lovato who are similarly outspoken, took years to build up a mountain of a career before coming to the front lines for mental health in a very public way.

PPLA was able to chat with X. ARI before her March 8 show at the Peppermint Club (which benefits jack.org) about “Pain Into Power” and Dis-Order:

PPLA: How did “Pain Into Power” manifest into a short film / EP? What do you hope people will take from it?

X. ARI: The Pain into Power Campaign is a combination of my EP “Dis-Order” (May, 2018) and my short film Grace,which is for mental health awareness. “Dis-Order” symbolizes the separation of oneself from labels, and not letting any “disorder” define or limit you. I split the word in half because any “disorder” is essentially a disorganized order. The title represents our ability to heal, to be cohesive again after feeling fragmented, and our capacity to free ourselves from the weight of labels. 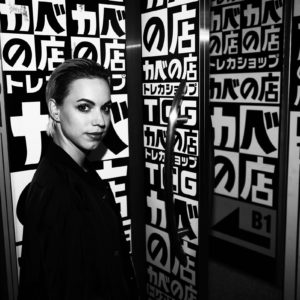 Pain into Power is about channeling pain and trauma into something meaningful and artful. Music has always been a therapeutic healing source for me, and I want to encourage people to find whatever their passion is, so that they can use it as a conduit for recovery too.

I’ve always had mental health challenges and I experienced a severe breakdown late 2016 where I ended up hospitalized and mistreated. It was a very traumatic experience and turning my pain into power through music and sharing it all has been helping me move forward and accept the trauma as part of my story. That’s why this has manifested into an EP and short film. At the time of my breakdown, I felt so alone. I truly think I that would have recovered sooner if I didn’t feel so ashamed, and had known that other people with mental health challenges have survived. That’s why I’m wearing my heart literally right on my face and completely exposing my story for the chance of helping others know that they are survivors too.

The reaction towards my project has been extremely supportive so far. I shared my mental health story in depth for the fist time publicly when I released my last single Vapors, and published my Self Care Tips on my website late January. Many people messaged me to thank me for sharing so much, and said that it helped them find new hope. Knowing that even one person felt not alone makes the discomfort of sharing so much more worthwhile.

PPLA: How does your latest release – Vapors – play into the upcoming release of Dis-Order? What can listeners look forward to the next few months before the EP release?

X.ARI: Every song on my EP ties into mental health, tragedy, and hope in some way, whether direct or indirect. Vapors is about the addictiveness of toxic relationships, and their negative effect on our mental health and wellbeing. My next single is Stay v Go, which is a female empowerment anthem about having the strength to be vulnerable. I’ll also be releasing a live performance of my song Cattle Call and I’ll be performing at Peppermint Club on March 8th and donating all proceeds to Jack.Org (a youth mental health network in Canada).

PPLA: Will Grace be released to a wider audience any time soon?

X.ARI: We plan on premiering Grace at a film festival either late 2018 or 2019. The film was written and directed by Dan Abramovici (Ben’s At Home, now on Netflix). The film focuses on family and a father’s experience of depression through the eyes of his seven year old daughter, Grace. It’s purpose is to continue mental health awareness. Once we do our festival run, the film will be available to the public.

PPLA: How has living in LA influenced your music / creativity?

Living in LA has been a dream come true. There’s a plethora of both talented people living here and international artists that come to town that I get to work with. I’ve been writing for other artists quite a lot over the past couple years, and LA has made that possible for me. I’m so grateful that I have at least 5 sessions every week, and I love what I’ve been creating with my collaborators.