Few movie franchises have had as many chances as X-Men. When the first movie hit in 2000 it was a major game changer and the industry would not be what it is now without it. But somewhere along the way it lost its path. After six films, all of which were hit-and-miss, the X-Men return to their roots (literally) and set things right in Days of Future Past.

For those unfamiliar, the Days of Future Past storyline is a fan favorite among comic book geeks and one that many have been clamoring to see on the big screen since it first made its debut in 1981. While the movie does not totally follow the original story (there’s almost no way it could) the time travel element perfectly suits the franchise and allows the series to get back on track.

More than that, it puts the films back in the hands of Bryan Singer, who originally directed the first two movies. This is fantastic on many levels as Singer built the foundation and tone for the entire series. The honest truth is a retcon was very much needed. After the amazing X2 the third film fell seriously short of expectations. Following X3 up with the even worse X-Men Origins: Wolverine should have probably shut the franchise down for good if not for the splendid First Class.

However one of the biggest problems with having so many movies within the same franchise is that some of them may work as standalone films but it screws with the overall continuity of what is supposed to be a set timeline. Keeping track of who everyone is and how they know each other is hard enough in the X-Men universe but becomes twice as hard when you have vastly different people playing the same character. This gets even more twisted once you consider the time difference between First Class (the 1960s) and the modern films (which take place in the early 2000s). Some of the characters that appear in both should be in their sixties yet don’t seem to age a day. That’s a major continuity error.

Singer attempts to fix these problems in Days of Future Past and succeeds on most fronts. Narratively it is a beautiful film that genuinely feels like a comic book switching between the far future and the distant past seamlessly. This is no easy feat when you consider that pretty much every mutant that has ever shown up in the movie universe makes an appearance in the film in one form or another, plus the addition of a few new ones.

Sadly, six films in, this is not the place to bring a newbie. There’s a small prologue by Professor X explaining how things got so bad in the future but beyond that audiences must already know who each of the main characters are both past and present. 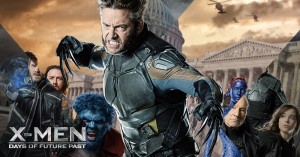 Keeping all of that in mind the final product is still a marvel to behold and must be seen on the big screen. The action is fluid and exciting while the acting is top notch from everyone involved. If you consider yourself a comic book fan at all you owe it to yourself to see Days of Future Past.