Could we be witnessing the launch of a new YA series that could rival the likes of the “Hunger Games” and the “Divergent” series? As a huge lover of YA series’ from the past, I was excited to delve into another reimagining of what the world will look like in the future and how a female protagonist will reign supreme.

“Seneca Rebel” by Rayya Deeb does not disappoint! The sci-fi story follows a 16-year-old girl named Dorothy “Doro” Campbell, who also happens to be a math genius. Through a turn of events, she is recruited to live in an underground society called Seneca, which is a beautiful utopia built for the most gifted individuals with one goal in mind, build a better future. 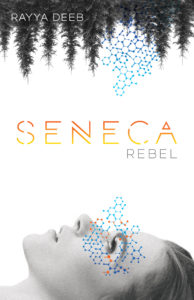 However, it’s quickly revealed that, “if it’s too good to be true, it probably is.” Doro soon realizes that perhaps Seneca isn’t the perfect society is strives to be when she uncovers a plot that threatens to destroy the perfect new nation forever. Not knowing who she can trust, Doro must become a rebel with a cause to protect the future of Seneca, and in turn, the World.

We won’t ruin the ending for you, but I can promise that once you pick this book up, you won’t be putting it back down. Deeb does a fantastic job with bringing the world of Seneca to life. What’s particularly groundbreaking is how Deeb is marketing and bringing this book to life. Many of the main characters have their own blogs and websites apart from the Seneca site which feature content created by and from that character’s perspective. Check out Doro’s blog!

While there are a number of sites out there (including a secret site which can only be accessed by cracking a code), we’ll let your sleuthing selves discover them. In addition to the extraordinary content Deeb has created, she has partnered with jewelry maker Charlotte Kruse to create an accessories line featuring items that the characters would wear. She has also joined forces with high-end chocolatier Mast to create a limited edition chocolate bar inspired by Doro’s favorite candy. Overall, the story is fast paced and jam packed with action. If you’re looking for a great summer read, look no further. Seneca Rebel by Rayya Deeb is not to be missed.

You can buy a copy on Amazon today. We’re sure this book will be making it’s way to the silver screen before we know it!