The band releases their new EP on October 16!

2012 marked a strong shift in music. Bands like The Lumineers & Mumford & Sons held charting singles and albums, making the folk/alternative scene spring to life. With that, a debut album from California band Yellow Red Sparks. Songs like “Buy Me Honey” felt like a coming together of the most sincere parts of the folk scene and adding to it the unique vocal presence of Josh Hanson – an artist we all should be paying attention to, if you aren’t already. 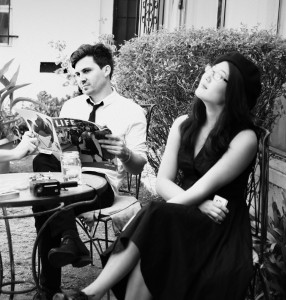 Jump to present day – after touring and a shift of band members (the group is now a duo with Sara Lynn Nishikawa) Yellow Red Sparks is releasing “New Fangs Old Pangs” on October 16th. A lyrically striking and soulful release, a first run through the tracks brings around that anxiously excited feeling that only happens once in a while – the feeling that someone has recorded a sound that explains everything you love about music in roughly 20 minutes.

“I really hope people can feel connected to some of the universal feelings throughout the songs. We all deal with difficult situations in various ways, but we also have the same opportunity to come away as stronger people and with a better sense of direction,” says Hanson. “Every track on this EP was written from a real place in my own life and the least I can do is put it out there for people to get something out of it and not just bob their heads to a beat. That’s the goal anyway.”

Two songs you can stream on the band’s Soundcloud now, “I Want My Knife Back” & “Seven Seas” give a good sense of just how toe-tappingly catchy Yellow Red Sparks can be. However, I feel like slower tracks such as (my favorite right now) “If I Get It, Then You’ve Got It” showcase the strength in both songwriting & melody that has developed over the past 3 years. Lines like “I would fight with you every night if it would make it right,” stick out to Hanson as his favorite on the EP. “I’ve always been in love with words and can clearly remember dissecting lyrics as a kid and imagining what the writer was going through or trying to say.”

As for how the band will support this release, Hanson says “That’s all up in the air right now. Sara is doing some traveling and I have been focused on writing and exploring different genres of music. We are definitely open to the idea, but it’s not at the forefront of our minds. Although, that could change tomorrow if Bob Dylan called.”