YOU HAVE HIS EYES ENDORSED BY DOCUMENTARY FILMMAKER D. CHANNSIN BERRY

A few months ago, I had the pleasure of telling a story from the point of view seldom seen in film. I was a wallflower during the beginnings of a time that shaped a man into someone who felt the need to seek out the journey of who he is, and where he came from.

A journey which started in South Florida and spanned thousands of miles across the globe and took hundreds of hours to create, and millions of tears to feel okay with having.

Now, months later, as the laurels from film festivals everywhere have fallen at its feet in recognition of its beauty, I again have the pleasure of telling another facet of a story that has shined through like a freshly cut gem, by interviewing a legend on the documentary circuit, D. Channsin Berry.

To get his take, as to why he feels the overwhelming need to endorse You Have His Eyes by Christopher Thomas Wilson. D. Channsin Berry is a writer, director, and producer whose titles evoke thought provoking discussions–especially amongst those in the film community–on race, biases in society, and cultural perceptions, as a whole. His titles like Dark Girls (2011-Director), The Prosecution of an American President (2012-Exec. Producer), and The Black Line (Director/Writer) have been the most recent and well publicized entries into the film lexicon of a professional whose career has been thriving for thirty years in documentary filmmaking and music.

This latest excursion into endorsing and presenting You Have His Eyes, is just another example of a filmmaker believing in another filmmaker, who share a belief that images and emotions can change perceptions and knowledge of the real world. I started off asking Mr. Berry, what it was about You Have His Eyes that was so compelling?

“I wanted to support someone else. It took a long time to find a piece that resonated with me, spiritually and emotionally.” All this, taken on the word of a friend who had a chance encounter with Christopher, and recommended Chris and Channsin speak.

Which at first, resulted in a missed connection, but through the serendipitous cycle that the universe provides, the two filmmakers eventually did converse, and at length. Upon which, Christopher sent D. Channsin Berry his piece in the hopes that he could help with a wider distribution channel.

“After about the first 55 mins, I had to turn it off, because I broke down emotionally. I mean, it was that compelling. It was deeper than just an adoption movie. It was about abandonment, strength, resurrection. It makes you see people for who they are, from a cultural standpoint.” The underlying message throughout the film takes you into the understanding of what it was like for Christopher’s biological mother and the ultra difficult decision she had to make.“…to understand the trials and tribulations of a mother; who says that the best thing was to give up her child, so that he could have a better life, to  Caucasian parents. That makes it deeper than color. That’s deeper than race. It’s just human, that’s just civilization, to be affected by that.”

When asked about the director of You Have His Eyes, D. Channsin offered this up. “Christopher is special. And the friends he has surrounded himself with, are special. You can tell. Just in talking to him, you can tell he has an assignment, like all of us have. He belongs to the world, and for this to be his first film, and for it to be so compelling for men, woman, everybody, is special.” For a man whose career has lasted this long on the Documentary circuit, to endorse your film and you as a person, clearly You Have His Eyes and its director Christopher Thomas Wilson–and not often mentioned editor and musical composer Stephen Taylor Witte (who is none for his expressive talents in his own right)–have done something right, and right on the money.

For a complete list of featured film festival awards (they are too numerous to list, but I’ll try) and upcoming screenings of You Have His Eyes, go to YouHaveHisEyes.com. 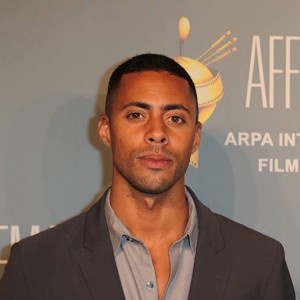