‘YOU HAVE HIS EYES’ THE JOURNEY BEFORE A DOCUMENTARY

Every so often the universe comes around and taps you on the shoulder and allows you the chance to say something. Comment on something you’ve witnessed first hand and can put your voice into. This thing for me, is an amazingly well received documentary done by someone I’ve known, in a round about way, for almost 20 years.

This is the story of a chronicled moving photograph that allows you to glimpse the dynamics of someone’s true life, not just another film imitating life. It is a personal journey through adoption (and its seedy underbelly), race relations, family, spirituality and the very essence of what begs to ask us all, what is family, is it your genes or your upbringing? The film is called, You Have His Eyes directed by Christopher Thomas Wilson.

It started in South Florida which is an anomaly onto itself. It’s the only part of the country in which the farther north you go, the more in the South you are. It’s the love child between New York and Los Angeles, and amongst all this beach line, clubbing, modeling, bandwagon fandom and beauty are little neighborhoods in which people actually grow up.

It’s a stew of thick international flavors melded between celebrity and material life in a sourdough bread bowl that gets watery and more broth like towards the edges, if not down right milky in places. I was fortunate, or unfortunate enough-depending how you look at it, to have moved to places all over South Florida. From Miami to Coral Springs, I bore witness to the peculiarity that is South Florida, first hand. Particularly, the “good” neighborhoods.

I was well accustomed to being the new kid. By Junior High I had already been through six different schools. Eventually, my family settled in the Northwest Ft. Lauderdale areas like Tamarac, Plantation, Sunrise, Lauderhill, Coral Springs, Parkland (never lived there, I just knew many lucky people that did), the list goes on. Amongst this never ending transition period, I vividly remember being enrolled in certain schools where the people were the same people I had met before (or will meet again) at one time or another. At one of those schools, is where this testimony begins for me.

Westchester Elementary was on the outskirts of Coral Springs, fringing on the Everglades, adjacent the well to do neighborhoods, but buffered by a series of apartment buildings that weren’t anything remotely well to do. Nothing, but more outliers. In this school, was someone I knew, who was just as different as me, but at the same time, was not new. He was “new” but not like me. This kid had been going to this school long before I showed up. He was an athlete and hung around the other athletes of the school. He played basketball day in and day out, before and after class, plus during recess. The kid had a three-point stroke that was weirdly mature for a fourth grader. He was smart. Well liked. A physical specimen. Normal.

The only thing was, he was sometimes treated to the whispers and rumors I had grown accustomed to over the years, always being the different kid. It confused me. I didn’t know why he was regarded as an aberration, like I was, like South Florida still is. This kid’s family was just as much apart of the neighborhood as Publix, but I remember how different things became for him at times. I mean I never witnessed anything overtly mean, although I am positive it happened, knowing the area like I do, but I do remember the kitty gloves his situation was sometimes handled with around town.

As I came to find out that it was because he was adopted (gasp!). I remember thinking, “That’s not such a big deal.” It was. At least in those neighborhoods, it was. These were the Pinky-Raised neighborhoods. These were upper middle class kids who knew nothing more than living on golf courses, riding in their mom’s Lexus and going to the mall. Apparently, that wasn’t the only thing that mattered, though. Chris was black (double gasp!). His parents were white (triple gasp!), and anyone who wasn’t privy to the life of this All American family personally (and believe me, they are an all American, business owning, God fearing family) subjected them to harsh whispers, terrible jokes, and above all, treatment of a different “subtlety” that at times wasn’t subtle or a joke.

Christopher Thomas Wilson, born January 17 was adopted three months after his breach into the world. His adoptive father, a family and community stalwart, has served South Florida through his successful small business Superior Roofing and French Concepts for over thirty years. All the while his mother founded and ran a Christian school in town called the Royal Palm Christian school, in which she held the title of Director for fifteen years.

Christopher Wilson, the fourth grader with the deep three was the kid I knew. Not the adopted son who at age four took it upon himself to point out the obvious one day while sitting in front of the mirror brushing his teeth. Noticing that he was black and that his mother was white “Mom, I’m different aren’t I?” To which his mother said yes, then preceded in the days that followed, to write Christopher a children’s book explaining it all. That was the kind of upbringing he was afforded. The Universal truth to the path. The cyclical presence of things to come. The sirens in the ocean of an upbringing, singing the path for their lead.

No one really knew, the adopted son with ties to a biological surname that is so famous in Caribbean culture that its utterance evokes nostalgia amongst islanders. No one really knew the paternal connection with great potential. Chris’s only contact to his biological mother was through the agency that facilitated his adoption, except this agency wasn’t everything that it seemed. In response to a letter he found, Chris drew on his upbringing. He wrote his biological mother a series of open letters into a book called, This Is What I’ve Been up To, only to find out that those letters never reached his mother.

The relief she was seeking in a few photographs to know her son was okay, dashed. The adoption agency had been closed only four months after Chris’s family received her original correspondence. They were selling children. Yes, selling children. Chris, it turns out, was one of those kids. The agency purposely started bidding wars between families to get the highest amount for each child, rather than placing them with the best fit. His one known contact to where he came from squandered only months after it had come to fruition, and with that letter, a mother’s plea to her son’s new found family is where the movie opens up, in all its nakedness. 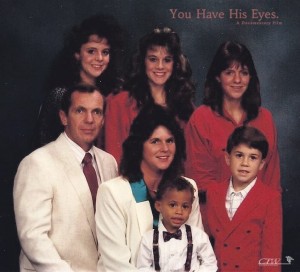 This is now his new open letter, except its not just to his biological parents, its now also to the rest of the world. It is the song of one man’s background played by a family band. His Biologicals on rhythm and bass. The Adoptives on the guitar and keys, steering their lead singer into a better harmony…to take this trip into the family album that is, You Have His Eyes. The odyssey that is one’s roots. Don’t just watch it. Share its power with those you love, because this is a film in which definitions get rewritten, and lives become examples, not incongruities. It is making its rounds around the East Coast and will journey to the West in a matter of months, bolo. In the meantime, take a trip of your own over to YouHaveHisEyes.com to see a trailer and follow the film on Facebook.