We caught up with Youtube sensation Jessica Lizama, aka ‘Exotic Jess’ to find out how she got her start in new media and what she sees as the future of user generated content. Her big tip to success: Consistency!

Plenty of people sitting at home right now would love to be the next Youtube sensation. But in a market with limitless competition, it’s not that easy to access your 15 minutes of fame. Jess Lizama- a Mom, Youtuber creator, actress and self-described ‘maker of the funnies,’ avid tea drinker, chocolate connoisseur, puppy lover, baker, and hopeless romantic- has managed to do more than that. We sat down to talk about just how she balances it all and remains in the limelight. Plus, a few great tips to get out of a ticket from a hot female cop (watch here.)

PPLA:  How did you first get involved with the entertainment industry,  with Youtube specifically?

JL: I got involved with entertainment by accident. I was going to college to be a pharmacist. I am Asian; I love Math, what can I say! So back in 2009, I uploaded a sketch comedy video where I improvised all of my characters and took them out on a ‘blind date’ and let it go into the world. And it did really well, I started gaining subscribers and my little audience started to grow and grow, and then BOOM! It kind of just became something I wanted to do all the time!

PPLA: Did you know Youtube would become so massive when you first got involved. Did you start from afar and then move to LA or were you always local?

JL: I did not know that YouTube would be so massive at the time I started my channel in 2009. Wow five years goes by fast! When I started my channel originally, I was living in Fresno, going to school, working full time as a billing representative, pushing paper for  eight hours, crazy. Then I became a YouTube partner, back when you had to apply to become a partner, so I was super pumped to be receiving consistant views and subsribers. Growing your channel was a lot different back then also, strategy was different, hell there was no strategy! We all did it for kicks. I still do it for kicks but it’s also turned into a business; my livelihood and my full time job. So after months of traveling back and forth from Fresno to L.A., I decided it was what I wanted to do and that was it. Actually, my first collaboration was with Michael Gallagher of Totally Sketch, I’m sure a lot of YouTubers have him to thank for inspiring so much of their channels. He’s amazing at collaborating with people and giving them a voice, a funny one. So we collaborated and then that’s all I did for the next few months was collaborate with some of my favorite YouTubers and I got to be funny and silly, on camera. That also was surprising to me since I never knew acting was something I’d love so much. I officially moved myself and my daughter out to L.A. after her eighth grade year, continuing to collaborate, continuing to build my channel, and trying to find my niche and what direction I wanted my channel to go in within the next year. And here we are now.

PPLA:  How do you decide what to focus on, how many videos to put out a week, where to shoot them, and what to talk about? Basically, tell us your secrets!

JL: When I first started my channel all I did was character work, sketches surrounding relationships because they were the easiest to make fun of. We’ve all been in crap relationships, on crap dates, and I decided I wanted to make fun of all of that. There really wasn’t a direction I had focused on. I was consistent in putting out content.  I guess that was my only focus at the time.

PPLA: When did you know it was really going well? Was there a moment where you thought ‘yes this is going to work out.’

JL: I think the first time I realized that my YouTube channel was doing well, and in what I felt was enough to sustain us and for me to pursue it full time, was when I got my first check that actually covered my rent! (laughs) I thought, “Okay, if we can pay rent by being funny than we can really do it!”. And so I did. I quit my job and I moved out to L.A. full time. I focused on my channel being something I not only did as a hobby but as something that could make other goals of mine happen. Being a part of this community and building my audience was such an exciting thing; it still is.

PPLA: A lot of people want to be full-time Youtubers, but it’s a big industry now and very competitive. Are you able to support yourself full time with this profession?

JL: I do support myself and my daughter full time with YouTube now. I do a lot though. I’m producing content for three different channels of mine now- two of my blogs, one of which I share with my daughter, and I also host which is my most favorite thing to do. So there are a lot of moving parts here. I definitely couldn’t support myself off of my views alone, let’s be real. I’m not in that realm yet. Yet.

PPLA: Where do you see the future of your channel and shows going? What new things will you be adding?

JL: The future of my channel is ever changing because my desires are ever changing. What I do know is that I’ll forever be a part of YouTube in that I’ll always vlog or create some form of content, whether it be me acting in a part for someone else’s video, or me hosting a segment of some sort, but it’ll always be something I’m a part of. What I’d really love is to have a schedule I can actually stick to. That’s been the most difficult for me, wanting to do everything so focusing on everything but micro-focusing on nothing, that’s the rough part. My goal is to upload once a week on each channel, blog three times a week on each of my blogs, continue my adventure series on my main channel with an awesome company, and travel more. Whew that sounds like a lot already! But you’ll never regret traveling and that’s something I plan to do more often….all the while vlogging of course! I’m also launching a lip gloss line and a clothing line I curated with all of my most favorite fashion trends. And I’m also launching my app with Victorious in September. I’m really really excited for and proud of that. I told ya, so many moving parts.

PPLA: How do you find juggling being an internet sensation with your personal life? Specifically with being a Mom?

PPLA: What advice do you have for anyone getting their start now as an internet personality? 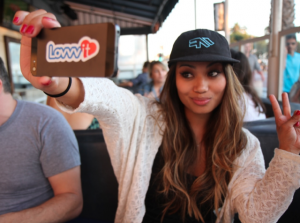 JL: My advice to someone wanting to start a channel on YouTube is to just do it. There are so many things that will keep you from uploading that first video. Just do it, we’re all moritified over our first videos, we all have the haters and the trolls, and the negative comments, but you have to just roll with it. Not everyone will like you and it’s exhausting to please them all anyway. Do what you love even if it makes you zero money because then you’ll never really be unhappy because you’re still gaining something from the process. Figure out what makes you happy and do just that, consistently, and get together with other like minded people and make some awesome fun stuff, consistently. See the trend? Haha, I can tell you what to do and I should really tell myself too! I have to tell you, this space is so saturated with content creators so you really have to find out what makes you different; you are different. And though the space is overly saturated, the community itself is small. And tight.

Check out the fashion line Jess just curated for Glamistree.