THE WIZARDING WORLD OF HARRY POTTER COMES TO HOLLYWOOD

Press Pass LA was on the red carpet for the celebration of the opening of “The Wizarding World of Harry Potter™” at Universal Studios Hollywood.

The long waited theme park has been more than five years in the making, with fans anticipation growing with the success of the other lands at Universal Orlando Resort and Universal Studios Japan.

The world of Harry Potter was masterfully recreated at Universal Studios Hollywood and stayed faithful to the visual landscape of the fiction and films created in J.K. Rowling’s compelling stories, including Hogwarts castle which serves as the iconic focal point. The castle includes the signature ride, “Harry Potter and the Forbidden Journey” which features a hyper-realistc adventure  in 3D-HD and a groundbreaking robotics ride system, fused with elaborate filmed action sequences and immersive visceral effects. In this updated adaptation of the ride, guests sport Quidditch-inspired 3D goggles as they venture through journeys experienced by Harry and his friends, spiraling and pivoting 360-degrees along an elevated ride track on a whirlwind adventure of a lifetime. Beside the castle, is a family outdoor coaster, “Flight of the Hippogriff,” becoming Universal Studios first outdoor roller coaster.

The opening ceremony included a performance by the Los Angeles Philharmonic led by famed composer John Williams, a spectacular light show displayed on the castle itself featuring the houses of Harry Potter including the Gryffindor lion, the Slytherin serpent, the Ravenclaw eagle, and the Hufflepuff badger who came to life on the castle walls,  and a finale fireworks display!

Guests enter the Wizarding World through the archway and Hogsmeade bustles to life with shops, eateries and even a full size train just as in the films! The snow-capped roofs and cobblestone streets give the park British sensibilities and transports guests of all ages to the very places they read about in the stories or watched on the silver screen.

The restaurants offer an opportunity to enjoy authentic food and beverage at multiple locations, including Three Broomsticks, and Hog’s Head pub, as well as the Magic Neep and Butterbeer carts. A foray through the shops also add to the authenticit 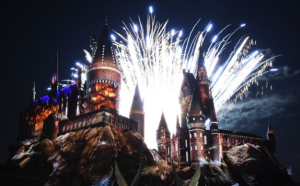 Check out our video with the cast and celebrity supporters who attending the opening above!